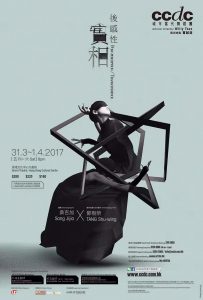 CCDC Resident Choreographer Sang Jijia’s latest work “Post-Perception/Transcendence” kicks off 2017 Dance Season. The title consists of “Post-Perception” and “Dharmatā” (here refers to “Transcendence”). “Dharmata” is a Buddhism term in Sanskrit, meaning the whole of things as they are. “Post-Perception” is a concept put forward by some Chinese artists in 1990s when Conceptual Art became popular; they questioned about what’s its meaning, what’s its value as a concept being formed? In this video, Sang Jijia talks about how he got the ideas of creating his new piece with these two different concepts. People’s Architecture and MediaNoche present SAN YUAN LI, a village trapped within the city of Guangzhou. The video will be projected on the handball court wall in White Park, framed by the urban landscape of Spanish Harlem, a district trapped in its own storm of social and economic change. Please come Thursday, July 19, at 8:30PM. There will be a Q&A with some of the artists who will be arriving from Beijing next week. SAN YUAN LI, 44 minutes, directed by Ou Ning and Cao Fei.

China is a country with one of the fastest growing economies in the world. Adding to the population shift, from country to city, are startling urban developments and re-distributions of wealth that boggle the imagination by the sheer magnitude and speed of change. At the blink of an historical eye, great rivers are dammed for power, farmlands choked into highways, and trees dwarfed by gargantuan skyscrapers.

Armed with videocameras, twelve artists respond to this tsunami of economic transformation by recording the unchecked growth of Guangzhou and the besieged village of San Yuan Li whose people valiantly resisted the British attempt to turn them into junkies (opium eaters) during the Opium Wars of the 19th Century.

In the new millennium, progress threatens to vanquish the people of San Juan Li. Modernization and expansion have been so rapid that the village is trapped within the sprawl of neighboring Guangzhou. Walled in by surrounding office towers and outnumbered by their yuppy neighbors, the villagers try to conduct their lives as usual.

Thriving on subsistence farming and traditional crafts, the villagers move to a different rhythm and perhaps heart rate. They creatively reinvent customary forms of farming, tending rice paddies on what are now empty city lots, growing chickens in coops on terraces, and cultivating fruits and vegetables on rooftops in makeshift terrariums.

Ou Ning and Cao Fei, the directors of SAN YUAN LI, worked with a team of twelve artists documenting the architecture and life in both San Yuan Li and Guangzhou. In a highly stylized, and impressionistic Koyaanisqatsi-type video, the paradox of economic growth and marginalization that is so much a part of China today is revealed.

The outdoor screening of San Yuan Li in Spanish Harlem reframes the problems confronting the Chinese village within the context of this community’s struggle against gentrification. San Yuan Li and Spanish Harlem may be on opposite sides of the planet but they are both bearing the brunt of a brutish capital.

People’s Architecture is a multi-disciplinary forum for the exchange of ideas, with the goal of facilitating a better global understanding of China’s architectural, infrastructural, cultural and economic development. People’s Architecture brings together perspectives from a range of disciplines-from design to linguistics to social science-in a series of public lectures, publications, exhibitions, and collaborative projects.

MediaNoche is a project of PRdream.com whose mission is to empower community through technology. MediaNoche offers residencies and exhibition space to artists working in new media, and seeks to connect Spanish Harlem to all parts of the world that recognize its long history of music, art, film, poetry and dance. MediaNoche_WiFi makes internet access available on East 106th Street and White Park for free. We invite new media artists to interact with our community by creating projects on the street or park. Come play!