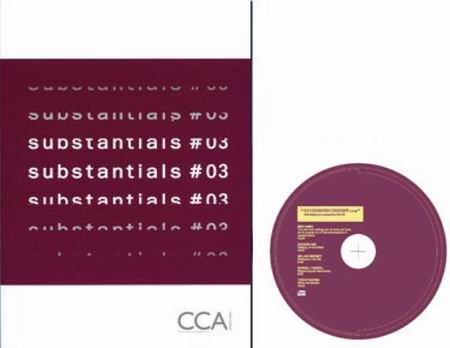 thanks  for the CCA crew of production and their hard work particularly for design/translation!

i just found that one of my cca workshop introduction not included in the book, so that i put it here to complete it.

"First, I’d like to say that I’m a musician with no formal musical training, meaning I can’t read or write music scores.  I’m saying this so it’d be easier for everybody to understand what I’m going to say.

My obsession with sound can be traced back to the early 80’s when I first contacted British new music.  Actually, it happened quite by accident.  My dad gave me a hi-fi component which came with a LP of New Order.  Since then, I started listening to different kinds of music including post punk, electronic and so on.  Those listening experience have some great influences on my music creativity later on.  My music creativity also happened by accident.  It all began when my company set up a recording system, multi-track recording system.  While I was learning to use the system, I developed some kind of interest in music creativity that grew deeper as time went by.  And when I got familiar with it, I started making some demos. Those demos were considered as my early works and were released as my debut solo album “PAST” under Tzadik label in 1996.

Since 1985, I have got into the habit of field recording.  At first, I was just recording the sound around me, for instance, the sound that I heard on my way to my grandparents’ house, in the bus, on the road, at home, during meals, or even people talking.  I used walkman, dat, md, and now dv.  These recordings are all very important to me, just like a sound diary.  I never thought that they would become the main sources of my musical works, but in fact they are.  If not for these recordings, I think I wouldn’t have started my music creation.  Well, definitely not.  Every sound of these brings some good memory from the past, so it’s a very pleasant process working on my musical works.  This is also the motive that drives me to the studio to create a new work.

I composed some musical works with the use of sampling method.  One of those is classical composition, which was sampling out of around 100 pieces of classical music.  I spent one day on sampling, and another day on synthesizing.  The piece was composed especially for my workshop in Krakow Academy School in Poland.  My purpose is to bring out a message to the professors and students that even without formal musical training, one can also compose music.  I hoped the students could have a more open-minded attitude towards musical creation.  One of the keys in creating music is the self-training on sound listening, and not just limited to music score.  Some of the important steps are the analysis of sound, re-organizing of structures and combination of elements.  Sometimes, we can put aside the formal musical knowledge, enjoy some moments of free creation, and take our brain and ears to a new journey of music appreciation.

Now, let’s improvise a new piece together.  If you have brought CD with you, you can take it out.  If not, we can use mine.  I would like you to choose the part that impresses you the most.  We will then cut them down and put into the computer for reconstruction and see how it will turn out.  I’m sure this process will give you an interesting new experience.  However, I’m not trying to get everybody to learn sampling and creation, but this process can help you to do immediate judgment on music, which is very significant in the reconstruction of sound or music.  When you know the characteristic of sound, you will have a better picture of sound art.

Today, I’d like to talk about “Sound and Composition”, and make an introduction of the present situation of sound-art artists in China.

The development of Chinese sound art didn’t start until 2000, with only one or two artists.  Up to the present, it has increased to around ten artists but only a few pieces of works.  The main reason behind this was due to inadequate resources, and lack of interchange and communication between artists.  When the ADSL (internet) came into existence, the artists finally had the chance to approach the sound art productions from international artists.  P2P was also the main source, as well as CD. However, CD was kind of expensive at RMB 150 each, which was not affordable to most fans.  This contributed to the slow and late development of non-academic sound art.  I remembered when I brought John Zorn and Eye to China back in 1996, none of the young people knew who they were.  The audience was mainly foreigners or jazz fans.  Of course, they were disappointed because that was a very experimental performance.

In Between 1994 to 2000, I invited different kinds of avant-garde artists to perform in China, mostly in cities like Guangzhou, Shenzhen, Shanghai, Beijing, Hong Kong, Macau, and Taipei.  Visiting artists included Otomo Yoshihide, Sachiko M, Peril, Zbigniew Karkowski, Mike Patton, Ikue Mori, Ruins, Keiji Haino, Masada and so on.  The recent visits of Zbigniew have push forward the development of sound art in China.

Speaking of Sound Art in China, I have to mention about the situation in Hong Kong and Taiwan.  Actually, Hong Kong is the earliest city to have experimental artists and CD releases.  The activities can be traced back to late 80’s including self-financed cassettes and fanzines.  In 1992, Sound Factory released the first CD by Chinese experimental artist Xper Xr which was also the first experimental album I produced.  Later on followed by I.666 and PNF.  Basically, they were all noise and avantgarde.  Nonetheless, it’s very hard to organize shows in Hong Kong due to lack of appropriate venues.  In addition, there weren’t many new artists, so the experimental scene kind of faded out gradually.  Until now, I should be among those who remain active, the rest I don’
t know.

With Taiwan, I came across an experimental group called Zero and Sound Liberation Organization in 1993.  The group was formed by 3 college students and disbanded after their graduation.  In 1994, I co-organized with the group the first underground music show.  There were around 2000 audience, and 20 medias, including tv, radio, magazines, came to make live-interview.  That was a very successful event.  After that, the event was held continuously for 2 years.  Eric Lin, one of the members of the group remains active until now.  Other sound art artists in Taiwan are Dino, Pei, and Fuiji Wang and some more i forget the name in this moment."